Ann Hamilton – Hanging By A Chain 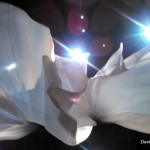 Since 2006 the Park Avenue Armory in NYC has been a mecca for performances and site-specific art installations. It is a difficult commission, for the building has a history and scale that competes for attention and can easily overwhelm.

Ann Hamilton’s Event of a Thread at the Armory was a complex “multisensory affair” featuring 42 swings connected to a large flowing curtain bisecting the Drill Hall, and a conglomeration of creative ephemera: caged pigeons, newspaper-wrapped radios, a daily song captured in vinyl (which was played back the following day), and some somber looking functionaries, dressed like extras in a Margaret Atwood dystopia, focused on various tasks with great seriousness.

Hamilton very cleverly coupled the swings, each of which could seat two comfortably, in the ceiling. This dampened their arcs and made for some 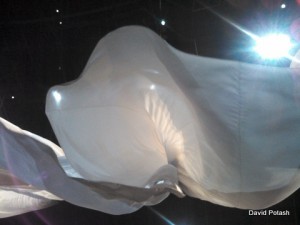 very interesting patterns in the curtain, which moved in relationship to the swings. Part steam punk, part Stevie Nix, the exhibit was both an invitation to play and a challenge to experience. What do you look at? And what do you take seriously?

New York State built many armories after the Civil War when wide-scale street violence was a near memory. Armories were military training grounds, repositories of weapons, club houses for militia, and visible reminders of the power of the National Guard to maintain domestic tranquility. The wealth of the NYC’s upper East Side insured that the Park Avenue Armory was much more than a very large military shed. Some of the period’s most successful designers contributed to the Armory’s lush and elegant social spaces. Its drill hall is enormous with 55,000 square feet unobstructed space. As a point of contrast, Tate Modern’s famous Turbine Hall in London is significantly smaller at only 36,600 square feet. The sheer size of the Drill Hall infantilizes most pieces. It is indifferent to the largest of objects.

The swings in Hamilton’s exhibit kept me busy for the better part of an hour. The swings, playful and childlike, belonged.  There was not question about their purpose or integrity. As for the extras, pigeons and the prose, I have not a clue. The complexity of the work rendered it inaccessible. The disparate activities may be related by some common reference, a shared thread of meaning. Or they may not.

Sustained engagement is a necessary but not necessarily sufficient criteria for art to succeed. Hamilton’s simple was far more effective holding attention than her complex. Isn’t it interesting how often that turns out to be true?

Published on:January 12, 2013 Category: Reviews, Things someone who grew up in NJ might write

I did not see Damian Hirst’s show at the Tate Modern this weekend past. Selling out quickly, the throngs were teeming and I watched people. And I took this snap once I stepped into the sunlight. No genitalia on the other side, by the way, but it’s clear that the ass end belongs to the Tate.

One of the more traditional ways in which the art world assigns value – collectively, of course – to works of art is the extent to which they ignore the economies of everyday life. The work may embody the time and talent of its creator. It may aspire to transcend, reaching the sublime. And lurking in the background, however, when discussing works of art is its price. The cost of a thing is what someone will pay for it – and that is its price. But its value?

One of the things that I admire about Hirst’s work is his ability to make us think and to ground much of what he does in the complex interplay of price, value and cost. Like Jeff Koons, Hirst wants to make lots and lots of money. I wonder, though, whether or not he wants to make great art.

Context for Hirst’s work is critical. Without context, it become pastiche, kitsch, collections, assemblies, or something odd. We will not look at it if it is not properly sited, situated and considered. Shark in tank? Fascinating, but one only stops and stares in certain environs. There’s nothing wrong with generating artistic meaning from context, but it can undercut the value question and, ultimately, the issue of price. For one of Hirst’s work to maintain its value and price, it either must remain in a proper context or it must become so well-known, so famous that its value is eponymous – like his diamond skull known as the “love of God.”

Makes one wonder, doesn’t it?