Hurricane Maria caused tremendous destruction in Puerto Rica in 2017, killing thousands and wiping out much of the island’s infrastructure. It was a disaster in the true sense of the term. A few days after the storm subsided, Jose Andres, an internationally renowned chef who had a restaurant in Puerto Rico (among several others), decided that he was going to make an effort to help. He recounts his efforts, filled with successes, failures and challenges, in We Fed an Island: The True Story of Rebuilding Puerto Rico, One Meal at a Time. It’s a cheering, frustrating, and interesting read – and not for the reasons that I expected. I did not know what a relief efforts was like for the key volunteer organizations. While I imagined confusion and difficulties, Andres’s book offers a more complete level of understanding – and highlights the consequences of poor leadership. The people of Puerto Rico were not adequately supported after Maria.

Andres is a chef, writer, television personality, and humanitarian – a man of influence and ability. In 2010 following a crisis in Haiti, he created a non-profit, World Central Kitchen (WCK), to feed people after disasters. He’s received numerous awards and by every standard, is wildly successful. As you might imagine from such a profile, he is also comfortable expressing himself. He is not a scholar; he is focused on outcomes. We Fed an Island captures all of this: incredible generosity, a tremendous ability to get things done, great smarts and a perspective that is about goal setting and achievement. It is a first-person account through and through. If you are looking for a more comprehensive study of the disaster, this is not the study. And while this book would have been stronger with more structure and data, that was not the aim. I have nothing but respect for Andres and gratitude for his work and the book. Proceeds from the book go to WCK, too.

For people to survive and rebuild after a hurricane, many things have to happen, from health care to water to power to shelter. Andres arrived and focused on one of the most basic needs: getting people enough food to get by. He drew on his experience with WCK and other relief efforts, as well as deep connections to many on the island, from former co-workers to elected officials to media personalities. Andres’ team quickly established kitchens and then, fighting a host of indifferent or ineffective bureaucracies along the way, greatly expanded its reach. It took time, but eventually other organizations stepped up as well. All though Andres’ was not the only group providing food, it is not far off from asserting that they truly did “feed an island”

The book is peppered with wisdom about relief efforts, problem solving of all shapes and sizes, and how restaurants work. “When you cook at scale, you become expert at processes” Andres tells us – and much of the book is all about process thinking. It’s also about how knowing your customer and community, which can make all the difference. Reading about the many different kinds of sancocho Andres’ team prepared was cheering and also made me hungry. Good Puerto Rican food is very, very good and a good sancocho is fantastic. Andres cares a great deal about the food, its impact, and even explains how customers can become volunteers. The big picture realization is the many ways that thoughtful and caring relief work can bind a community.

Much of the book, though, is about the challenges. Above and beyond the difficulties that Puerto Ricans faced, Andres and his team faced many, most visible of whom was President Trump and other elected and appointed officials. Andres does not hold back his criticisms. Particularly galling, but not surprising, are the recurring gaps between what was happening and what was reported. There was a massive lack of coordinated leadership in the relief work, regardless of what was reported.

Through a different lens, We Fed an Island is a call for reform. It is essential. We need to rethink our disaster relief organization and processes. Without that, the next crisis could be worse. Andres is worthy of our thanks – for his work, his food, and his willingness to share.

If you are looking for a dispassionate traditional academic history of Puerto Rico, do not read War Against All Puerto Ricans: Revolution and Terror in America’s Colony. Do not seek it out if you want a dry textbook on Puerto Rico in the twentieth, a volume loaded with charts, tables, economic or demographic data. There are many traditional books that give that sort of information. However, if you are interested in learning how many people think and feel about the impact of colonization in Puerto Rico, how the exploited tell and understand their history, what a passionate study of violence and repression told from the ground up would be, this an excellent source. 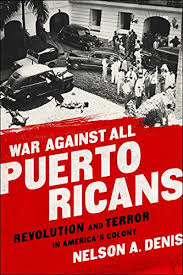 New York City attorney, film-maker, journalist, activist and former state representative Nelson A. Denis authored this non-fiction study. His anger and outrage are clear from the book’s preface, which opens with the childhood history of his father, a Cuban immigrant, who was arrested and deported from their family home in Washington Heights, New York City. In the pages that follow, Denis tells the story of colonialism, revolution and repression in Puerto Rico from the 1890s through the mid-1960s. The heart of the book is the rebellion of 1950 and the clampdown that followed it. Argument and persuasion is the aim as much as recounting history.

Key figures are central to the narrative: Pedro Albizu Campos, who led the Nationalist Movement; Luis Munoz Marin, the long-term governor, and key Nationalist leaders, Juan Emilio Viguie and Vidal Santiago Diaz. Denis explains the 1950 conflict as part of a longer term struggle. He is exceptionally strong recounting the massacre at Ponce in 1937. Police killed 19 people wounded several hundred. Denis does an important service highlighting this tragedy, as well as many other lesser publicized facts of Puerto Rican history.

A good illustration is Denis’s discussion of the 1948 Public Law 53. It was called “La Ley dela Mordaza” (The Law of the Muzzle or the Gag Law) in Puerto Rico. This legislation forbid discussion of Puerto Rican independence and owning a Puerto Rican flag. More than 3,000 were arrested because of this law. Appreciating that history is central to understanding the prevalence of flags at Puerto Rican parades and festivals in the continental US. Appreciating the larger history set out in this book is equally valuable in contextualizing current debates about the island.

War Against All Puerto Ricans is a people’s history – think Howard Zinn. It does not provide all answers, but what it does address, it does so well and memorably.

Published on:August 15, 2018 Category: Things someone who grew up in NJ might write No Comments on Remembering People’s Puerto Rican History