Cycling through Chicago neighborhoods, walking in this fascinating city, I often wonder about its development. Who built what and why? How did we end up with our city of neighborhoods, our parks, our nodes of this and that? The architecture, the public and private spaces of this city, are extraordinarily interesting. Add to that the city’s rich, vibrant and often troubling history and even more questions arise. Why are we so segregated? Why are some parts of the city so wealthy and others so much less so? It doesn’t seem to have much to do with geography. There’s no elevated part of the city that overlooks the rest. Chicago is a flat metropolis and public transportation, while important, does not offer a guarantee of an improved infrastructure or a healthier neighborhood.

Are there two inexorable neighborhood trends in the city: gentrification with exclusion or under investment with poverty?

Recently I read a short volume that helps to answer these questions, at least in one Chicago neighborhood. Daniel Kay Hertz’s The Battle of Lincoln Park: Urban Renewal and Gentrification in Chicago is an accessible study that could be considered local history. Read it carefully, though, and it offers more. It is a case study, a window into how politics, racism, and economics intertwine in the creation of our built environment. Hertz is a Chicago native who knows his way around the city’s economy and politics. He’s a reliable guide in this book, which unpacks and questions the dynamics of gentrification. It is well-written, thoughtfully considered and chock full of smart analysis. My greatest complaint is that it is light on maps. They would have given the book even more punch.

Lincoln Park is a community on the north side of Chicago, bordering Lake Michigan. In the years after World War II, it was a dynamic neighborhood filled with a diversity of backgrounds, incomes, races and economic activity. Though certainly not edenic and clearly suffering from the long-term effects of the Great Depression, Lincoln Park had much going for it. It appealed to artists and other creative types after the war. Knowingly or not, deep changes were coming. It is from these first influx of post-war residents that Hertz starts his story. He follows them, and the shifts in the neighborhood, for the coming decades. There’s increased movement by white middle class people, a push for urban renewal and slum-clearance, which disrupts neighborhoods, and the organization of community groups who preach inclusivity while promoting practices that drive less affluent community members out. All of this happens in phases, usually connected to broader economic trends. By the 1960s, the neighborhood has greatly stressed, particularly as a vibrant and politically active Puerto Rican community was displaced. Those changes led to violence and riots.

Architecturally, multiple-family dwellings are replaced by single family homes. This brings in new types of families and excludes those with lesser means. The population dips as wealth ticks up. Federal dollars speed up the rate of transformation. A few large developments shape the community further, each of which involve “clearance”, or removing buildings of less property value, under the flag of “improving the community.” These are highly contested politically charged affairs. Hertz stresses, though, that the underlying transformation is steady and ongoing, with or without the big projects proceeding. From 1945 to 1970, the span of this book, Lincoln Park is the site of significant and long-lasting change. It has continued, too, as have changes and gentrification in many other parts of the city.

Hertz does a good job presenting different perspectives from the neighborhood. He’s very interested in giving voice to those that were not able to exercise much political power. Gentrification can cause real pain and harm. It can also bring benefits to an under-resourced area. Ultimately, Hertz is less concerned about policy and more in telling a story of the built environment. Hertz pays close attention to who did what and why during those years. It begs the question of economic gain and problematizes the idea of a “nice” neighborhood. That is a loaded issue, particularly when one considers who is determining it and why. There is much more to community than property values. Or large single-family houses. Reading his book and walking Lincoln Park, it is much easier to understand the neighborhood and, importantly, to think about how other neighborhoods have and are changing. It calls into question what people think of as community and why. That is a very important question, one we need to continue to address if we are to have a healthy city. 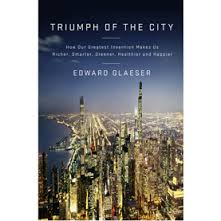 Edward Glaeser, Harvard economist and prolific blogger, is enraptured with cities. His 2011 book, Triumph of the City, is a paean to all things urban, with a special place for the twenty-first century mega-city. The work is a breezy airport read. Informative and lightly pedantic, it is a departure for Glaeser, who is a well-respected economic researcher. It is a work well suited for what we used to call the middlebrow market.

Triumph jets around the globe, zooming in on this city or that from 35,000 feet . There is little to no original scholarship here. Instead, Glaeser has skillfully assembled a host of anecdotes and a panoply of data points to argue that cities are good for people and the planet. His narrative rests on his observations and insights. He is smart, well-informed, and confident in his prose. The argument driving the book is summarized neatly in the subtitle: “How our greatest invention makes us richer, smarter, greener, healthier, and happier.”

Cities, Glaeser claims, are magnets for smart human talent. As they create opportunities, they and their inhabitants flourish. Density promotes competition and competition forces innovation. Glaeser promotes ever greater density here. He criticizes mindless historic preservation as an impediment to urban success with a nod to Jane Jacobs. The narrative presents pros and cons of various urban policies, but is distant from the human politics that create the cities and decide those policies.

For all of Glaeser’s urban enthusiasm, the book has an oddly antiseptic feel to it. Some is due to the author’s relative lack of interest in people as individuals. He is, after all, a social scientist. The deeper reason is that Glaeser’s argument is fundamentally about the relative benefit of cities to society; it is not about the joy of living in a city or in a particular city. This is not an issue of class, integrity, or design. I share Glaeser’s affirmation of high-density mixed use, though I am less keen on the high-rise. Nor is it about crime or grit. Missing is a sense of the flavors that go with city life.

A certain kind of urban aesthetics about how one leads one’s life necessarily must inform writing about cities. For all of Glaeser’s intellectual enthusiasm, his book does not carry much personal passion for city life. The tensions, interactions, and felicity that accompany the forced socialization that accompanies being squeezed together in a city do not complicate this work. Glaeser does not strike this reader as in love with cities, though he certainly does wax warmly for New York. But I see him in a high-rise condo, perhaps on the upper East Side. It is difficult to picture him in a walk-up in Brooklyn or Queens. It came as no surprise to learn that he now lives in the suburbs with his family and children.

I guess my aesthetic is just different – another good reason cities are a great place to live.

Published on:February 3, 2015 Category: Things someone who grew up in NJ might write No Comments on You Can’t Keep Them Down On The Farm – Glaeser’s Triumph of the City