New York City, Gotham, a space of opportunity or threat? Or perhaps both?

Brian Tochterman is an associate professor of sustainable community development at Northland College and the author of The Dying City: Postwar New York and the Ideology of Fear. The book is a reworking of his University of Minnesota history dissertation, but it’s not traditional history. This is cultural and intellectual history, with little economics, demographics, political studies – and few “great men.” Tochterman, who is from the midwest, has a provocative perspective on New York City in the latter part of the twentieth century.

The Dying City spans from the end of World War II until the early 1980s. Tochterman posits two discourses about the city: cosmopolis, as exemplified by the optimism of a young E.B. White, and necropolis, as defined by Mickey Spillane. These visions and narratives competed as ways to best understand and define a rapidly changing New York City. White presented the city as open, young, growing and inclusive; Spillane represented the city as dangerous, a frontier with little order calling out for violence and strong men. From these two constructs, Tochterman spins a web of voices, actions, debates and decisions to explain the Big Apple.

The book draws from literature, film, popular culture, criticism, music and media. It’s not comprehensive. Instead, Tochterman’s methodology is more opportunitistic and impressionistic. He crafts arguments of contrast: White and Spillane, Robert Moses and Jane Jacobs, growth versus destruction. Running throughout the narrative is a heightened appreciation of how narratives of fear framed debates, decisions and cultural production. The books makes one appreciate just how pervasive fear is as a justification, a motivator, and as a means of control.

One of the challenges of cultural history is inclusivity. Most people do not get published, do not produce “culture” and their voices and influence may not be recognized. I think that the issue especially difficult in framing what happens in the city, where interactions between people and groups of people spark all manner of creativity. New York City has been a tremendous engine for cultural production. Tochterman’s construct tends to focus on the work made by white and educated professionals. There’s nothing wrong with that focus, but is it the most representative? He could have done something similar but given priority to the origin and growth of hip hop and rap, for example. Who matters more: E. B. White or Grandmaster Flash? There are no easy answers – just different framings.

One could claim, using a more traditional history lens, that there are more “accurate” ways of understanding the sweeping changes New York City faced after World War II. One could pay close attention to demographics, to changes in the economy, to broad political trends, and the general shift of influence to the west and the south. However, that is a different kind of book. Tochterman has crafted something thoughtful in The Dying City. It’s creative and well done. And while it may be a bit too dissertation-like for some, I found it very interesting.

Voyeur Ethnography: Everyone Wants Something

In 1978, while Keith Richards was embroiled in legal troubles, Mick Jagger was living in New York City and working on Some Girls, a superb Rolling Stones album. In the album’s last song, Shattered, Jagger sings of Gotham:

The Stones captured something essential about NYC in the rough 1970s in about three minutes. Much has changed over 35 years, but much has remained the same. It would have been helpful if Sudhir Venkatesh, rogue sociologist from Columbia University, knew this when penning his exploration of the underside of NYC, Floating City. It is a deeply frustrating book, made doubly irritating because hidden away, amid a self-referential narrative, are valuable observations about an important topic. It should be more substantive.

Venkatesh made his academic and literary name with Gang Leader For A Day. That is a compelling study of the South Chicago drug economy made possible through the sociologist’s friendship with a gang leader. Through charm, persistence and a non-judgmental profile, Venkatesh earned a place of privilege in a violent urban subculture. His vantage point provided more than enough material for a provocative book. 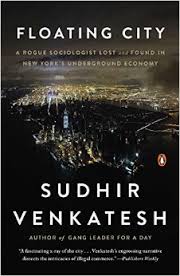 Now in New York City and with a professorship at Columbia University, Venkatesh tries the same approach in Floating City. Problems quickly multiply. New York City’s off the books economy is very complex. He is unable to define his research or the project. He befriends a drug dealer and prostitutes, but friendship does not necessarily translate into ethnography. His academic peers describe his work as journalism. Venkatesh may embraces a “rogue” title but his confidence rings hollow. His marriage dissolves. His subjects are beaten and arrested. They are all in distress. New York City is not afloat – Venkatesh is.

If we bypass the prurient in Floating City – and Venkatesh’s fascination with prostitution and prostitutes borders on the obsessive and exploitative – and the author’s all too frequent discussions about himself – what remains are some interesting stories of how legal and illegal blur. What makes for cultural capital in a constantly shifting city? It is well-trod ground and reminded me of one of my favorite neglected books about Gotham.

In 1850, a reporter for the New York Tribune, George G. Foster, wrote New York by Gas-Light and Other Urban Sketches: With Here and There a Streak of Sunshine. He describes prostitution, drinking, gambling and the evening economy and lifestyle in a rapidly changing city. Foster focuses on more than explaining and exploring. He draws attention to the hypocrisy of respected political and civic leaders who criticize the underground culture while enjoying and profiting from it. Foster identifies with those that work at night. It is a strange book that captures a city becoming modern.

The dynamic interdependence of legitimate and illegitimate is extremely interesting. Patient readers can glimpse it in Floating City. More than the interplay of legal and illegal, it is the interplay of competing economies and cultures. An area of tremendous vitality, that interplay leads to Bronx hip hop becoming a global phenomenon, or Brooklyn street fashion travels European runways. Grasp it and you have a sense of what makes New York City such a special place.

Robin Shulman’s Eat the City is a cheerful account of the idiosyncratic passions that allow for the making of food in New York City. Lightly mixing history with contemporary interviews, Shulman makes it clear that the city has always been a place where some make, find, grow or catch their food. Further, while many of us no longer thing of New York City as no longer playing that role, it is. 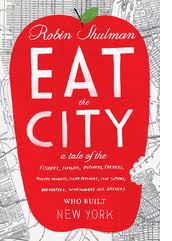 Broken into chapters by food group – bees and honey, meat, wine, sugar, vegetables, fish and beer – the books nimbly covers the geography and history of the city. Shulman is more interested in people and tastes than production or society. Restaurants rarely rate a mention and it is mighty difficult to find a recipe in the pages. It is difficult to tell is Shulman is motivated by curiosity or a deeper love of food. I would have wished for the latter, even at a price of her professionalism. Her subjects all display a singular passion for their pursuits, be they ale or smoked pig from a Queens farm.

The book’s structure reflects the long shadows of John McPhee, for narrative description, and Michael Pollan, for argumentation and structure. But this is no polemic. Shulman’s text is grounded in close observation. A practicing journalist who has spent extensive time overseas, Shulman has an eye for detail. Implicit in the work is an ideological agenda, however, these people are doing something important and interesting. But that raises questions. Are the locavores merely characters? Hipsters?  Or do they represent something larger or something more important?  I would argue that they do, but Shulman shies away from bigger arguments. She could have – but reading this one has the sense that she never really settled down with a clear of idea of what she wanted the book to say.

It is, however, a tasty read – particularly the chapters on bees and meat. And a welcome addition to the study of the world’s most interesting city.

Published on:October 29, 2012 Category: American Culture Today, Things someone who grew up in NJ might write No Comments on Gotham Locavores Rejoice