Naturalization and the Global Citizen

Immigrate into a country, have your papers approved, and you are “naturalized.” If you lack a passport or the right documents, you are considered “stateless” and your state of being is “unnatural.” Words often underscore complicated truths. We live in a world that demands allegiance to a nation-state. Those that lack it – refugees, undocumented, trans-nationals – live at the mercy of bureaucracies, courts, and an increasingly xenophobic public. 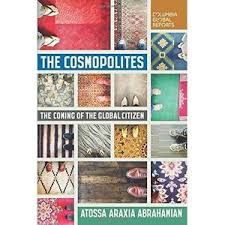 Atossa Araxia Abrahamian examines the stateless from an unusual perspective – the selling of citizenship – in The Comsopolites: The Coming of the Global Citizen. A journalist, opinion editor at Al Jazeera America (recently shuttered), and current resident of Brooklyn (where else?), Abrahamian’s primary focus is on the United Arab Emirates, Kuwait, Comora, and the rearranging of citizenship and passports for a price. At issue, though, are much broader questions. A more ambitious book lies beyond this work, and Abrahamian wrestles with keeping it in check. She is smart, curious, and as much interested in stories and histories as she is in policy.

The bedoon (not the Bedouin) are the stateless people living in the UAE and Kuwait. Legal status and the accompanying paperwork did not matter much thirty or forty years ago in the Arabian peninsula. The Gulf War, changing economics and global politics, shifted the government’s priorities as Kuwait’s independence became a bureaucratic reality. Those who resided in Kuwait and UAE but originally hailed from Iraq, Iran, or Saudi Arabia were caught in a legal and geographic limbo. Their families were enshared, too. Unwilling to grant these people citizenship, governments had no clear way to deal with them. The state wanted security, ways to take advantage of the stateless’s labor and resources, but without a long-term commitment. A significant percentage of the Kuwaiti army is bidoon. What sort of rights should they have?

One of the poorest countries in the world, Comoro are a series of islands in the Indian Ocean between Mozambique and Madagascar. Comoro’s political leadership was enticed into trading citizenship for money, first with the Emirates and then Kuwait. Abrahamian uses her journalistic skills to tell a story of wheeling-and-dealing figures, scrambling to make deals and profits. It reads like an espionage movie with a thread of farce: undercover deals, private jets, and all-expense covered shopping trips.

The story of the bidoon introduces the larger issue of purchased citizenship. It is not a theoretical question. Many countries have provisions for it. The very wealthy, or “ultra high net worth individuals” as they are called in the trade, often possess multiple citizenships for convenience and tax purposes. The Caribbean island of St. Kitts, for example, was well-known for offering citizenship for a significant investment in the local economy. Abrahamian talks with some of the citizenship/passport brokers about their business and the competitive market.

Stepping back, then, the two groups that are representatives of a new global citizenship are the very wealthy and the dispossessed. The size of the latter group has swelled tremendously as wars like the conflict in Syria have driven millions from their homes. Recent estimates put the number of refugees around the world at more than 60 million. If the world’s refugees were to claim a country of their own, it would be ranked in the top 25 in the world in terms of population, holding about as many people as France. The Cosmopolites does not look at the refugee crisis but it lurks at the narrative’s door.

Driving Abrahamian’s book is a sense of justice. She emphasizes that we live in a globally interconnected world that enables the freely flow of capital but prohibits the same freedom of movement to people. It is a good argument. She explores alternatives: a few of history’s characters who have challenged the idea of belonging to one nation and early policy attempts to help the dispossessed. She sees the issue of statelessness as something that could be resolved with the right bureaucratic commitment. The Nansen passport, a brilliant product of international agreement following the Russian Civil War, gave the stateless a means to travel safely. It helped thousands and thousands of refugees. We have evidence that when there is political will, reforms are possible.

It is a tall order. If we look at the questions Abrahamian raises through different lenses: immigration patterns, refugee histories, border-free zones such as in the European Union, and the persistence of nationalism, it is difficult to be optimistic in the near future. The past few centuries have not been kind to people who have lacked the political organization of the state. The power of nationalism to strengthen shared identity and to shape policy and practice cannot be underestimated. Even the universal citizens of the cosmos need passports.

Published on:June 23, 2016 Category: Reviews, Things someone who grew up in NJ might write

Natural in Tooth and Tax Code

The process by which one becomes a citizen is called naturalization. It’s an intriguing term; implicit is the assumption that someone who does not hold citizenship is unnatural. Yet it doesn’t take much imagination to imagine a time not so long ago when citizenship was not quite so formal. And it is also easy to think of place where the inhabitants wear the identity of citizenship very lightly.

A recent The Economist editorial praises the value of a second or third passport, which is very much in line with the values and wants today’s global, multi-cultural populace. Drawing on its nineteenth century liberal heritage, the publication argues for more free migration of peoples, just as does for goods. Restriction of dual or multi-citizenship, a trend in some countries, is likened to protectionism by the magazine.  “A better approach,” goes the argument, “would be to use residence (especially tax residence) as the main criterion for an individual’s rights and responsibilities.”

If only citizenship – and naturalization – was governed by rational actors and economic issues. For many, the very potential of lightening the burdens and obligations of citizenship pull at the very fabric of national identity. Tax codes may drive decisions for some; for many people, the idea of changing citizenship is extraordinarily traumatic.

I anticipate increasingly freighted debates about citizenship in the future, particularly as the culture of educated people moves farther and farther away from those that are less educated. Education in a developed country today is synonymous with access via the internet to information, people and ideas of almost incomprehensible complexity. The boundaries of space and time are much different for the educated and connected than from those that are not – and here will see ever greater tensions. And those that feel threatened with the loosening bonds will demand ever greater national compliance.

Published on:January 11, 2012 Category: Things someone who grew up in NJ might write