In Shakespeare’s play Henry V, King Henry tells a Frenchman before the Battle of Agincourt that “we are but warriors for the working day; our gayness and our gilt are all besmirch’d with rainy marching in the painful field.” Not a boast, it is a statement of fact regarding the commitment and sand of the English soldier. “But, by the mass, our hearts are in the trim” the soliloquy ends. Powerful and moving.

Peter Elstob lifted the quote for the title of his outstanding WWII novel about tank warfare. It’s an apt choice. Warriors for the Working Day is a superb book about the day-to-day of fighting in World War II from the solder’s perspective. It is beautifully written and extremely compelling, pulling the reader into the grit and internal stresses of the war. Most importantly, it is lightly fictionalized. Elstob knew the subject, personally and intimately, and that knowledge informs the entire endeavor. Published in the 1950s, it has resonance and impact today.

Gripping and engaging, the book is sprinkled with literary allusions and devices. The novel is structured into two parts. Book One, “First Light” is based on when it’s possible to distinguish between black and white. Book Two, “Last Light” is when it’s no longer possible to distinguish. The structure is literal and metaphorical, capturing the kinds of battles the soldiers’ face and the arc of the war through a soldier’s eyes. There is action, drama, and quite a bit of thoughtful reflection. Elstob’s skill allows one to enjoy the book’s prose, too. His writing is that good.

One character, Brooks, functions as the key thread throughout the novel, anchoring the action and the plot. However, the novel explores more than Brooks and his growth as a tank commander. We meet the senior officers and soldiers who school him, his colleagues, the men he commands, and a wide range of people he encounters in England and Europe. The book opens with training before D-Day and ends as the tank command is in Germany, heading toward the war’s conclusion. Characters come, go, live, die, and through it all, the soldiers must fight. They also have to fight in order to fight. The stresses, the demons, the pressures are constant and debilitating.

Warriors for the Working Day stands as a powerful corrective to narrative war history, the kinds of books that explain battles with maps, arrows and charts. With outcomes known, they give sense to what is inherently impossible to comprehend. Those kinds of history books are necessary but far removed from the actions of the poor folks who have to drive the tanks, shoot the weapons and hope for the best. There’s an immediacy to Elstob’s writing that carries you directly to the battlefield, to the bureaucracy, and the day to day. He is particularly good in his characterization. Everyone seems more than real.

Elstob’s personal war experiences made certain of the reality. He was a Royal Tank Regiment volunteer (his attempts at the RAF were unsuccessful). Elstob saw action in Asia, Africa, England and Europe. He lived through all that is recounted in Warriors for the Working Day. Moreover, he penned several military histories. Elstob truly knows his subject and that shines through his writing.

Massive thanks to the Imperial War Museum for reissuing this classic novel. It was as strong as anything new that I’ve read in years.

When we think about war, we want to find heroes and villains, to craft lessons of morality. The violence and horrors of war demand that we come up with reasons and purpose. Without, it is all too terrible to contemplate. There can be no learning from random chaos. Nor is it worth our time to investigate or retell stories of empty violence. Consequently, we search for sense-making and meaning when talking about war, the reasons why and what it can teach us. Likewise, we hunt for lessons in the stories of individuals caught up in conflict. The wish is to make the conflict intelligible or understandable – even when what happens in war cannot be truly comprehended. There’s a basic human need to find some sense in the insensible.

Americans characterize World War II as a “good war.” Pledged to democracy, the US was the victim of a surprise attack by the Japanese and few villains have ever matched the evil of Nazi Germany. From the war’s onset, America claimed the moral high ground. In many ways it’s an accurate perspective. Studs Terkel cemented this interpretation in his fascinating and best-selling oral history, The Good War. It makes me wince when I hear “the good war” dropped in conversation. World War II was a global conflict and America was far from the only decisive participant. Many of the histories of the war are not about good, bad or morals. They are about awful circumstances and people trying to stay alive. There is not much good in that.

A Woman in Berlin: Eight Weeks in the Conquered City is a diary of survival. Written by a female German journalist as the Soviet army took over the city in 1945, it is a harrowing and extraordinary first-person account, pragmatic and clear-eyed in its detail. She tells us about day-to-day struggles for food, water and shelter, about death and dying, and about rape. The narrator is raped repeatedly by Soviet solders, as were thousands upon thousands of German women. Historians have not determined how many Germans were raped at the end of World War II by Allied forces, but the numbers are astronomical. Estimates range into the millions. Sexual atrocities at the end of war were pervasive, under-reported and for decades, ignored. As more scholars are realizing, sexual violence is a constant part of warfare. Rape in wartime is war by another means.

The author of A Woman in Berlin published her diary as a book anonymously in the 1950s. It was widely read in multiple languages and ignored in Germany. The author, who died in 2001, refused to have it republished in her lifetime. An updated translation into English came out in 2005, forcing a re-reckoning of the book and ready assumptions about the war’s conclusion. The arrival of peace in Europe was far from peaceful The book upends conventions of who is a victim, who is a criminal, and how and what sort of choices are possible in wartime.

At end of the war, Berlin was mostly inhabited by women, children and the aged. These people bore the brunt of the invasion, just as they had suffered through much in the past few years. We do not immediately think of German citizens as victims. They were, though, and none of the survivors in A Woman in Berlin had agency when it came to German politics or military strategy. They, like most people most of the time, simply looked to the basic needs and wants of everyday life. The immediacy of the author’s experience captures this and more, from the Soviet’s fascination with collecting wrist watches to what it felt like to stay in a bomb shelter during a raid. Our author is brutally honest, with herself and in her conversations with others. Knowing that rape is unavoidable, she seeks out an officer to protect her and to limit the possibility of random violence and rape. It was a decision driven by necessity. She wonders if she can call that a relationship in those circumstances. It was consensual to avoid rape.

A Woman in Berlin is as accurate a story of World War II as any traditional tale of heroism in battle or derring-do in resistance. The author’s prose rings true. Her voice, her language, her descriptions have tremendous integrity. I have a sense that the author’s disciplined writing, her commitment to her journalism, gave her a sense of self in a time of great pain, terrible choices and uncertainty. No one knew what the next day might hold.

The author notes the emptiness of Nazi male posturing and the collective disappointment of German women. It’s an important reminder when we place people on pedestals or talk about “good” wars. Certain conditions may make war necessary. Study it, live through it, or think about it, though, and there’s but one conclusion: do not celebrate war. William Tecumseh Sherman, a US Civil War general, summed it up. “Some of you young men think that war is all glamour and glory, but let me tell you, boys, it is all hell.” 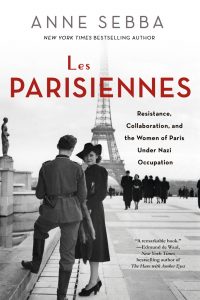 Les Parisiennes, by Anne Sebba, examines at the lives of women in Paris from the late 1930s, through WWII and the Nazi occupation, until after France regained autonomy. More historical journalism than a traditional work of history , the book attempts to capture the wide range of experiences of women in this period of crisis and change. It’s an ambitious endeavor. Sebba has consulted memoirs, biographies, the popular press, and, occasionally, primary sources from everyday women in Paris. However, so much happened to so many over the 15 years that simple or even consistent characterizations are very difficult. It’s an extraordinarily interesting time – a period of drama and heartbreak, as well as heroism – and Sebba does a fine job capturing the period’s complexities.

Most of us are not historical actors. Rather, our lives are shaped by history. Sebba gets this. The key battles of World War II were not fought in Paris. However, the war’s violence – and in particular, its violence against Jews – took place throughout the city. It was a battlefield of a difference sort. Sebba gives the reader a better understanding of the interplay of individual women’s lives and the moral ambiguity of life under occupation. Questions of honor, collaboration, and agency were all played by women and on women, literally and symbolically. I think that Sebba could have advanced a more explicit feminist argument – it would have sharpened her narrative – but her interest is in the person.

Sebba is attuned to the horrors of the war. She examines its impact on her subjects, writing with compassion and imagination. She is a skilled writer.

Sebba, also, is aware of the difficulties inherent in her approach. She seems of two minds, sometimes giving more focus to the political. Other times she is more keen on the personal. In fact, there are two  subtitles to the book: Resistance, Collaboration, and the Women of Paris Under Nazi Occupation is one and the other is How the Women of Paris Lived, Loved, and Died Under Nazi Occupation. The former is more historical and the second is more biographic.

Haunting Les Parisiennes are questions of why: why did some women collaborate and others resist? Why did some women risk their lives to protect Jews and others were fine profiting from anti-Antisemitism? These questions are difficult and they defy simple explanation. Read collectively, they speak to the deep challenges of everyday life in the occupation.

The lives Sebba has unearthed are extraordinary. The war was a cauldron for choice – one could not simply “live” and get by. Basic survival demanded extreme behavior. With or without broader analysis, the individual stories make for fascinating reading. Les Parisiennes offers a valuable perspective to understand the complex tragedy that was World War II.