If we are now in an age of cities, P.D. Smith’s City: A Guidebook for the Urban Age  is the self-proclaimed resource for 2013. A richly illustrated compendium of history, biography, urban studies, anecdote and travel guide. Smith is an unabashed enthusiast for urban life and living. The chapters are arranged thematically (“Arrival,” “Where to

Stay,” “Money,” “Getting Around”) and jump from city to city across the globe. Less a travel book and more a considered reflection on all things urban, Smith’s work highlights the incredibly complexity that makes cities such important features. It is beautiful, thought-provoking, enjoyable, and interestingly, not quite right.

I was a frequent visitor to New York City as a child. My parents would take our family into the Village to eat, to midtown to hear music and see theater, and to the Bronx to visit my father’s relatives. The City  was always tremendously exciting for me. It usually was great fun, but not necessarily comfortable. It consistently surprised me. I loved being in the city but I did not love the city – I did not know it.

Demographers and planners consistently debate the relative impact of urban areas versus suburban areas. Most Americans live in suburbs, but recently population growth in cities has been faster than in suburbs.  Around the world, more and more people are living in cities, with a projected 75% of all humanity slated to live in metropolitan areas by 2050.  The overall vitality and strength the greater metropolitan area (that’s when you add suburbs to the city) are what matters, too; metropolitan areas are sites of energy, wealth and opportunity.

I grew up in Madison, New Jersey – the “Rose City.”  Located twenty-five miles from New York City, Madison was and remains very much a small-town suburb with 15,000 or so inhabitants. Most of the borough consists of single family homes and a small downtown with locally owned shops defines Madison’s shopping district. Understanding Madison is impossible without paying attention to its role and relationship with New York City. Some jobs in Madison require commuting, but also many other jobs depend upon the corporate headquarters and back offices that have sprung up in Morris County as part of the larger “edge city.” 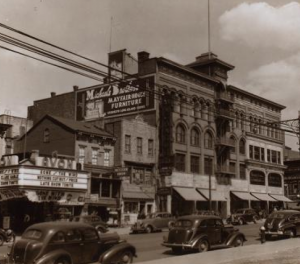 As a toddler on one trip to Manhattan, pausing before a construction site, I had my parents in stitches when I asked if the city was every going to be “done.”

Cities defy omnipotent narratives and perspectives. Panoramic images may sell books – and Smith has plenty of these – but they are unhelpful fictions when it comes to understanding cities or why they are the future of mankind. Cities reveal themselves to observant participants, glance by glance, and only through multiples lenses – be it race, class, gender, time, space or mood. Pick a city block. It will never be the same block to a commuter, a tourist, or a resident. It is not the same block at 3:00 pm and 3:00 am. Rarely are two glimpses of a city the same. Smith misses this, amid all the photos, the walks and interviews. He writes that a city is its people, but never quite conveys the elusiveness of phenomenological meaning-making in an urban environment.

Last week we revisited Park Slope, Brooklyn , where we used to live. Walking well-traveled blocks and pointing to the children the entrances to buildings and houses where we once lived, it was familiar and not-familiar, same and different. Chance encounters with friends confirmed the vibrancy of the neighborhood, its constant state of flux, and the joy living in a city as dynamic and unknowable as New York City.

Published on:December 30, 2012 Category: American Culture Today, Reviews, Things someone who grew up in NJ might write

I live in Brookline, MA, and before that I lived in Park Slope, Brooklyn. Both are high-density urban environments filled with highly educated families keen on providing their children a good education. These kinds of environments feature specialized coffee stores, independent bookstores, organic food and many places to eat and drink. They are gay-friendly, supportive of the “creative class,” and better able to handle serious financial problems; they are cities central to Richard Florida’s conception of where the economy and society is headed. I like Park Slope and Brookline – as do many of my friends who share my demographic – but I’m not nearly as certain as Professor Florida. 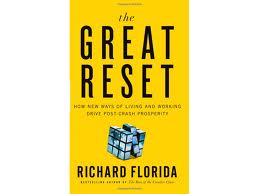 The Great Reset is another opus in the ever-productive, market savvy Florida. His themes are well-known and juicy: the creative economy has overtaken the traditional manufacturing economy and that this urban, cosmopolitan, well-educated “class” represents the future. In Reset Florida takes the longer view, emphasizing how the Great Depression reshaped internal and external landscapes of work, home and values. He sees such a transformation resulting from the financial crisis of 2008-2009.

What happened? Housing values plummeted, many were thrown out of work, and different areas were affected differently. The larger, more “creative class” metropolises, he writes, weathered the storm more effectively. As for the consequences, people are starting to value conspicuous consumption less and instead seeks status through other means. It accelerated the decline in popularity of cars and cities dependent upon sprawl and housing prices. In contrast, the mega-regional cities, marked by large cities, government centers and the presence of large universities, fared relatively well.

The appeal of these big, broad statements is that they seem – at least to those of us who have graduate degrees and live near universities – is that they validate our choices. Florida’s future is in many ways our future. The difficulty with Florida’s arguments is that they are supported at times by the weakest of reeds. In this book, in particular, he jumps about without developing a sustained argument or marshaling facts in a systematic way.

For example, Florida posits the decline of importance of the car. Really? Just because some suburbs are emptying and a subset of younger Americans who live in certain cities are eschewing automobile ownership does not spell the demise of the automobile. I’d suggest that automobiles, in one form or another, will remain an extraordinarily important part of our economy and society for decades. They may be powered by alternative fuels, look different and ownership structures may change (more Zipcar options, for example) – but it would be foolish to think that the car-free future is around the corner.

Amid all the conjecture, however, are very worthwhile observations – about gender and jobs, and work and meaning, and about the broad shifts in our society. Further, his underlying assumption that something really important is forcing deep change in America is probably correct, too, though I believe we’re still way too early in the process to know what it means or where we are going. Florida writes well, too, and that cannot be discounted; you would want him on your panel, around your table, or at the bar. He would give you something to mull over, to chew on – just as he has done in this book.

Published on:February 14, 2012 Category: Reviews, Things someone who grew up in NJ might write