Sex and Drugs and Rock and Roll

Ian Dury‘s lyric’s continue “very good indeed.” For that male musician, and for most male rockers, they are all of a piece. Music matters, to be sure, but so, too, does the lifestyle. It is what motivates pimply young men across the globe to pick up guitars and craft love songs, anthems and ditties. 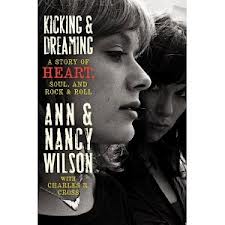 Why do women rock musicians pursue the dream? The question drove me to pick up Kicking and Dreaming: a Story of Heart, Soul, and Rock and Roll. the joint autobiography of Ann and Nancy Wilson, the creative force behind Heart.  Did they do it for love? Did they do it for money? It turns out that they did it because they really liked making music together.

It is one of the oddities of the book, a strange mixture of wild tales and bourgeois sentiment. The sisters were raised in a Marine household, moving regularly but always remaining disciplined. The eldest sister rebelled, giving space for the two to explore music and eventually join in a band. The toured, they paid their dues, and then thanks to Dreamboat Annie and Magazine, they found commercial success. Accompanying the popularity were all the expected problems – relationships, drugs, personalities, and the loss of the values that propelled them to stardom.

Unusually, however, Heart did not go away. They reformed, started working with other song smiths, and then found renewed commercial success. The use of someone’s else’s work was somewhat challenging, the sister’s tells us, but not overwhelmingly so.

Heart’s commercial popularity was significantly aided by the sisters’ sex appeal. They were well aware of their appearance (and the challenges posed by Ann’s weight), and they used it to 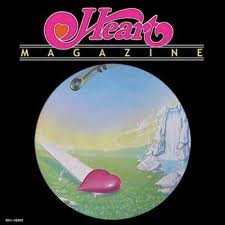 their advantage. They also clearly resent the rampant sexism of the music scene. “Barracuda” – perhaps one of their most aggressive tunes – was driven by their record company’s rumor mongering that the sisters had a lesbian affair. Yet a decade later the two were unabashedly promoting their videos, the sister’s tell us, through imagery of their breasts. It was, of course, the record company’s idea. But what was Heart’s idea?

As much I enjoy Heart – and love Magazine – the sister’s book was surprisingly pedestrian. Sure there were wild anecdotes, and yes, they truly come across as nice people, but there is little in the book that gets into their perspective, their talent, or their passion with any depth.  The process by which they create music is treated relatively lightly.  The sisters do not talk about any creative differences and their focus, through much of the book is what happens to them – and less about what they did. Sure they did – and that’s there, but they tend to see it more as a matter of fact, a matter of record.

The two did struggle – with addictions and with destructive relationships – and happily they emerged as authors in a much better place.

It is a must, however, for Heart fans and aficianatos of 70s and 80s popular culture. Nevertheless, I’m keeping my fingers crossed that the next rock autobiography I come across has more substance to it.

Published on:December 15, 2012 Category: Reviews, Things someone who grew up in NJ might write

Modeselektor at an advanced age

Modeselektor was recently in town and I was fortunate enough to catch their show at the Royale. Three musicians – two front and center, 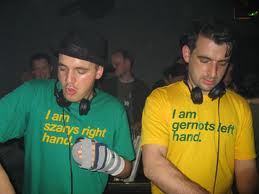 one tucked off to the side with a keyboard; two screens and a some hardware. All in all, very good, very dance inducing kind of show. Their music is neither harmonically brilliant or poundingly house. It’s a mixture of light hip hop and happy German dance. They’re funny and fun, meaning that above all, the show is fun, especially so when played loud with strobe lights. So while I didn’t leave humming any of their tunes (relatively short on hooks), I did go home sweaty, tired of dancing and quite happy – and I’m spotifying Modeselektor at the gym.

The wikipedia entry notes that Modeselektor is a favorite band of Thom Yorke from Radiohead, which made me think of the ways in which musicians plump for other musicians. They don’t write book jacket blogs and it takes a bit of digging to determine who likes who. And even if they do like [insert name of obscure band/musician here], that’s no guarantee that you will. In fact, musicians almost always go out of their way to celebrate a musician that often doesn’t fit. It’s as though when queried, most

musicians feel obligated to name someone really different or really obscure. If not for other musicians, would any Captain Beefheart music ever be sold?

When I was a young man, I trucked in the lesser-known. Pick your punk, your new wave, your alternative to the alternative, and I more often than not had a mix tape. Fabulous Poodles, anyone? It takes time and effort, though, and rarely results in much social capital. As I’ve matured, my tastes have not – I tire very quickly of music that I heard 10, 20, or 30 ears ago – but my acceptance of what I like and listen to has shifted and broadened as well. So while I do still fancy the unusual (Afropop to German electronica), at long last I am completely at home and comfortable with much of the popular. Chris Brown may be a violent human being who doesn’t sing all that well, but he sure knows his hooks. I like Katy Perry and I think that Jessie J. is a fine song writer. Give me my Ludacris and Kanye. My street cred may suffer, but if music makes me smile, I have to like it.

Published on:April 26, 2012 Category: Reviews, Things someone who grew up in NJ might write