Do not expect a straightforward memoir. Instead, Wortman jumps from field posting to field posting, adventure to adventure. He paints pictures of local communities and the disconnects (and connections) between those on the ground and those from afar. Translation of language, culture and purposes is a common theme across countries and years. And like most translation, you make think that you “have it” only to find out that something is missing.

Leaves is particularly strong on teasing out the multiple levels of ethical challenges that accompanies the work of international development. Degrees of agency are always constrained. Who is, or can even be, a true “friend.” Overlaying lines of authority and influence complicate even the most simple of exchanges. Added to this are stories of relationships, almost all of which are tangled and destined for failure. It’s difficult to maintain an optimistic romantic outlook – and at heart, Wortman is a romantic – in such environs.

Wortman also points out ways that aid has helped, has made lives better, and has created opportunity.

To Get an International Job Done

Amid partisan wrangling, international conflict, and the quantification of risk, is it possible today to do something grand on the international scale? A war, perhaps, but what about project with global implications? And can anything be done in the Middle East? To answer just that question I recently read Zachary Karabell’s Parting the Desert: The Creation of the Suez Canal. 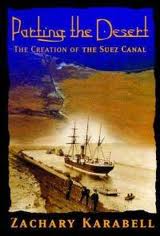 Karabell is a twenty-first century Renaissance man. He is an economist and money manager, has overseen mutual funds, and has his own firm looking at economic and political trends. He is also a Harvard educated historian with extensive knowledge of global economic development and the author of several books. Most importantly, Karabell has the background, training and perspective to explain one of the most daunting construction projects of the nineteenth century: the building of the Suez Canal.

The waterway, which connects the Mediterranean and Red Seas, was a massive engineering feat when first completed in 1869. It did not, though, require all that much by way of innovation or cutting edge technology. What made the building of the Suez Canal such an extraordinary undertaking was the politics and the people involved. This is the focus on Karabell’s thoughtfully written study.

Many since the time of the Pharaohs recognized the value of connecting the two seas through canals. Ptolemy led one such project. The earlier efforts silted up, however, and it was not until Napoleon invaded Egypt that the idea gained traction. Numerous studies were undertaking, but none had a clear champion the vision, perseverance, connections and will to bring the idea forward. Until Ferdinand de Lesseps, a well-connected diplomat whose career derailed due to French politics in 1849, took up the cause.

Karabell patiently explains the conditions and leadership of Egypt at the time. He makes clear that while de Lesseps may take the hero’s role in the tale, Egypt’s Khedive, Sa’id Pasha, was essential in creating the political environment for the Canal’s success.  De Lesseps knew Sa’id Pasha as young man, and as Karabell regularly notes, de Lesseps multinational connections were invaluable. Not only did Egypt have to approve the Canal and provide the labor to dig the waterway, de Lesseps sought international funding of the company, as well as the support of France, England, the Ottoman Empire, and other European leaders.

Through incessant effort and skillful political management, de Lesseps increasingly engaged French government in the project. He parlayed cultural fascination with things Egyptian into support. Karabell has a firm understanding of French culture in the 1800s and regularly connects the colonial exoticism of Egypt with the domestic politics of France. The creation of the Canal basically came about through a France – Egypt partnership under de Lesseps driving vision. Opposed to the project, England may have benefited the most from the increased opportunities for world trade and maritime power.

Ultimately, as Karabell makes evident, the Suez Canal provided significant benefit at significant cost. One senses the author’s identification – with the key players in the story of the Suez Canal – and also with his admiration for the success of the project. It truly took an international vision with international expertise. And it would be an equally daunting task today.