Benjamin Barber (1939 – 2017) was an extremely influential scholar and political theorist. Prolific, insightful and super smart, his writing tends to work on two levels. First, he makes erudite and well-grounded arguments. Barber was an emphatic advocate of strong democracy. That theme, his commitment to democratic thinkers such as Rousseau and Jefferson, and his desire to democratic values advance, is consistent.

Simultaneously, Barber’s writing is studded with brilliant observations, asides and comments. He saw things, noted trends and reasons, and they often stop me in my tracks. In fact, I can find these more remarkable than the big picture arguments.

Recently I spent a few hours reading a collection of Barber’s essays, A Passion for Democracy: American Essays. Published in 1998, the book contains works that are even older; the volumes are from a different time. There’s no internet – Barber was a keen student of technology – and many of the references and concerns now seem like distant memories. We don’t worry about the Soviet Union or shopping malls today. Questions of equality and rights are woven throughout. It was a different time.

And yet – and this is what I admire about Barber – there is much to learn from him. He notes the relationship between strong leaders and weak citizens. He forecasts the splintering of viewpoints through new technologies. He notes how the market can censor. Barber repeatedly calls for citizenship, an active and informed people, as the best bulwark of rights, opportunity and justice. These are timely and relevant, still today.

Taken as a whole, I think of the essays in the volume as bright spot lights on particular issues. The light emerges from a hard to locate place – and time – but what it reveals, it does so well and with great clarity. The challenge is that unless one is familiar with what’s under the spotlight, context and relevance may be a problem. I would wager that this volume would have more immediate connection to an older reader, or perhaps someone keen on understanding the 1980s and 1990s when it comes to politics and political issues. Nevertheless, there’s some real wisdom in this.

Barber’s voice is missed. We would be better-informed and wiser if he was alive and writing today.

With the drama and politics surrounding Chicago’s mayor Rahm Emanuel, I have been thinking about mayoral leadership and what it takes to be a successful mayor. It is not an easy job. Mayors offer an unusual kind of elected political leadership. They face challenges and opportunities very different from representatives at the state level or in Congress. Mayors are almost never as partisan as governors, though the may share some similar traits. Effective mayors are relentlessly pragmatic, an uncommon characteristic of elected officials. As New York City mayor Fiorella LaGuardia once quipped, there is no Democratic or Republic way to pick up the garbage. 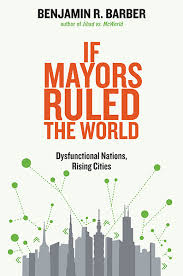 Scholar and political theorist Benjamin R. Barber thinks that the future of effective government lies with mayors. He believes that nation-states will become increasingly unreliable in future years. The mayors of mega and major cities will find ways to solve problems and enhance the lives of those who live in their cities. He explains this and highlights successful mayors in If Mayors Ruled The World: Dysfunctional Nations, Rising Cities. In Barber’s mind, the key issues we face: terrorism, environmental collapse, poverty and public health can be best addressed though cities led by mayors with a pragmatic bent.

It is a provocative concept. Can mayors save democracy? The book meanders and there is no appropriate mechanism for aligning mayoral priorities. Barber’s interviews and research lead him to high-concept issues and the mundane, like how to get rid of abandoned cars. The challenge is that the urgency of the pragmatic is far from inspirational. Barber has high expectations for those that have to find ways to make sure that the garbage is removed.

A mayor who understand this is former Miami mayor, Manny Diaz. The son of Cuban immigrants, Diaz is a local boy who succeeded. A strong athlete in high school, he attended FIU and then the University of Miami School of Law. Diaz was involved in local politics behind the scenes until the Elian Gonzalez case made him a national celebrity. He ran for mayor in 2001 and again in 2005.  Under his leadership Miami’s finances stabilized and many meaningful reforms took place. Diaz championed transportation focused design, clean streets and sustainability. He received several awards and much positive press as mayor. When he left office, he headed to Harvard, where he wrote a book about himself and his time in office: Miami Transformed: Rebuilding America One Neighborhood, One City at a Time.

Diaz’s autobiography is resolutely positive. He sees progress in his family’s journey (his father was imprisoned in Castro’s Cuba), in his childhood in Miami, and his professional life. He writes that he beat poverty through education. He believes that others can do the same. Diaz’s hope is that his focus on the pragmatic – solving problems and getting things done – will inspire others. He sees a need for greater involvement, especially among the young, in public service. Not everyone viewed Diaz as favorably, of course. He has his share of critics and a few scandals did mar his time in office.

When Diaz writes of a grand vision, it is of Miami several decades in the future. He imagines greater educational opportunities for all, a thriving economic base, and a city that keeps its inhabitants safe, secure, and happy.

It seems to me that the traits that successful mayors bring to the table might very well be what we need in other leaders in other arenas. Less of an imagined Nirvana, perhaps, and instead solid incremental improvements. I do not believe that global leadership necessarily demands a focus on the small bore, but it isn’t a bad way to run a complex organization. In fact, in can be quite effective. We could do much worse than turn government over to mayors.