Brown in Chicago: A Different History

Popular culture can reduce race to a black-white issue. It is not. A thoughtful look makes clear that race in the US is complex with a complicated history. When I taught history and immigration, issues of race and racism were always part of the conversation. Students worked to identify similarities of experience across times and groups, but we tried to be vigilant noting importance of looking at the unique challenges and opportunities facing each grouping of people.

The history of Latinos/as calls out for special attention. Neither “black” nor “white,” the emerging Hispanic population in the United States has a unique history or, more properly, histories. For example, Mexican Americans were categorized as “white” through a nineteenth century treaty and only formally first identified through the Census bureau in 1980 with a question asking for “Spanish origin.” Inhabitants of Puerto Rico are citizens. The role of Latinos/as has not been stable and it has shifted through time and across areas. 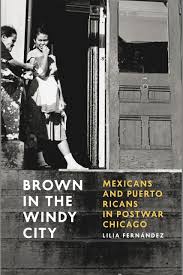 Lilia Fernandez, a professor at the Ohio State University, teaches this lesson very effectively in Brown in the Windy City: Mexicans and Puerto Ricans in Postwar Chicago. It is closely researched, well-written, and an essential work to understanding the city and its racial dynamics. It sits at the intersection of many vibrant areas of research: immigration, labor history, identity politics, neighborhood activism, race studies, gender history, and urban history. Every library on Chicago history should contain this book.

Windy City opens by explaining Latino/a immigration to Chicago from an economic perspective. Fernandez sketches out the reasons that people from Mexico and Puerto Rico made the journey, emphasizing that the issue of citizenship and status made for different opportunities and different challenges. Depending upon their skin color, connections, and local environment, these immigrants to the city faced a range of responses and racial attitudes. Jobs with state sponsorship and support made immigration attractive. Mexican immigrants were often in the US through the bracero program, which was developed to help address labor shortages. Similarly, the government of Puerto Rico worked to sponsor labor leaving the island for jobs on the mainland. Opportunities were plentiful in the years after World War II, but by the 1960s jobs were starting to leave Chicago. The drop was 13% from 1960 t0 1970 and continued in further decades. Massive numbers of jobs were instead created in Chicago’s suburbs. The most noticeable shift was in the steady decline of Chicago manufacturing. Many of the Latino/a immigrants worked, or tried to work, in these sectors.

The book, though, is less about economics than about place considered broadly. Fernandez wants to understand what physical places the immigrants moved to and why. She examines how they established individual and group identity through building community. She also cleverly pivots the concept to study what place in the social and political order of the city that the Latino/a immigrants took. The hub of Latino/a immigration in the 1940s and 1950s was the Near West Side. Hull House, Jane Addams’ famous Progressive Era settlement house, was at the center of this rapidly changing community.

Demographic changes did not take place without human influence and intervention. The Latino/a communities were part of a larger racial redistribution of the city. City leaders were very conscious of who lived where. The Near West Side was in play in a larger game of power. Despite local neighborhood activism, the area was destroyed and redeveloped through highway construction, the siting of the University of Illinois Chicago, and local incentives for business and housing. Residents had to move. The impact of those decisions is evident today.

The Puerto Rican community resettled mostly to the Near North Side, then to West Town and Humboldt Park. From that context and history, it is easier to understand the evolution of the Young Lords Organization. Fernandez covers this well-known history of non-violent street gang to neighborhood activism very well. She also details the Mexican community movement to Pilsen, the area around 18th Street and then beyond. From these two intercity migrations the Puerto Rican community learned grassroots activism and gained political power, particularly through decades of strife with abusive police. In Pilsen, the Mexican community grew in tandem with a larger Chicano movement.

Fernandez provides some very interesting information on pan-Latino/a organization, with special attention to gender. Her work on women’s activism and the founding of Mujeres Latinas en Accion (Latina women in action) is fascinating.

Fernandez observes that some Latinos/as tried to address their role in the city through the lens of ethnicity, not race. It was a strategy that ultimately was not successful and did not have political clout. Latino/a neighborhoods were situated in buffer spaces between blacks and whites. This was an open secret in Chicago politics. Groups needed to organize in order to compete for resources. Once group identity was asserted – through voting, marches, and activism, the established power structure took notice. It is a pattern seen again and again in Chicago.

A political theorist might argue that in a pluralistic power structure, survival depends upon effective mobilization. The larger question, and one that Fernandez does not raise, is why Chicago’s default organizational pattern is pluralistic. Missing from her narrative as well as much of Chicago’s history is a sense of the shared or common good. I hope that greater understanding of the challenges that different groups face may help with that more idealistic goal.

Getting a better understanding of Chicago – an endlessly fascinating city that never fails to engage, challenge, and surprise – is an ongoing project of mine. It’s also a project without an end. Chicago presents itself many different ways. As I have listened and learned more from many Chicagoans, I have increasingly turned to the past to try to get a better feel for the present. According to the Migration Policy Institute, Chicago is the second largest site of Mexican immigrants in the United States. (Los Angeles area is first and Houston is second). Why Chicago? How and when did this happen? Who were the first Mexican immigrants to Chicago? And what has life been for those who have journeyed from Mexico to Chicago over the years?

Great insight into these and other questions are found in Michael Innis-Jimenez’s Steel Barrio: The Great Mexican Migration to South Chicago, 1915-1940. The book is thoroughly researched and carefully argued labor and immigration history of the best kind. Innis-Jimenez is a professor of American Studies at the University of Alabama. A study of the first-wave of immigrants to Chicago, Steel Barrio goes far in explaining the foundation of the Mexican community in the windy city. It adds much to the puzzle that is Chicago.

The pull for Mexican labor came from the steel mills of South Chicago. First recruited in large numbers to break the 1919 strike, Mexican workers found themselves in a cauldron of labor and racial strife. For these early immigrant workers, their hopes and experiences were different from many other groups who moved to Chicago for economic opportunity. History, geography and citizenship laws were part of the difference. Most Mexican laborers did not express a desire to make America their long-term home. Special immigration rules and status created a mobile network for Mexican labors, who could move from job to job in the United States. Even if they remained in Chicago for years, their overall tendency – as reported by Innis-Jimenez – was to see the arrangement as temporary. They had what Innis-Jimenez calls a “sojourner” attitude, engaging in civic and cultural life differently from immigrants who believed America would be their new home.

Innis-Jimenez explains how racism and power structures limited opportunities to Mexican immigrants. Chicago was less a melting pot for immigrant groups than a city where groups competed for resources. Racism ran in many directions and life was tough. Without governmental protection and support, Mexican immigrants had to help each other. They formed mutual aid associations and other systems, formal and informal. Innis-Jimenez highlights their efforts and how the contributed to a vibrant culture and shared identity.

Sports figures prominently in the community and in Steel Barrio. Neighborhoods took great pride in their athletes and teams. Baseball was very popular. Through baseball games and Mexican inspired fairs and events, the Mexican community made claims on public space.

Innis-Jimenez provides thoughtful analysis of how gender roles and expectations shaped daily life. The immigrant community reflected very traditional Mexican gender roles. Women tended to stay home and focus on the family. Men worked and were more active in public life, but only in certain arenas. The workers tended to stay away from unions. Language was both a community bond and a barrier. Overall, Innis-Jimenez effectively helps the reader understand the community’s path to activism and achieving a greater voice in economic, political, and cultural matters.

While the history covered in Steel Barrio ends with WWII, the legacy of these early immigrants remains. It is a very good book, one that I hope is regularly taught in college classrooms. It has a pride of place in my growing library of Chicago studies.