An Homage to my Bicycle

A mid-life crisis is a cliche with teeth. A staple of stand-up and the butt of jokes, it is funny until it disrupts a relationship. That begs the question: if you acknowledge a milestone birthday, how do you prevent a mid-life crisis? How do you reassess, reassure, and move forward in a healthy manner? I’ve been mulling this over. Bad behavior, especially in our current situation is most unwelcome. And no worries – it’s not me that faces the problem – I’m well past the age. Rather, I’m concerned about my bicycle, which just turned 40 this month. That’s a pretty important birthday and I want to make sure that we get through the coming years on the best of terms. I would like to keep my bicycle moving forward, on the straight and narrow, with few opportunities for mischief. My planned solution is this post, an homage to my bicycle and last-century British bicycle manufacturing, and a tune-up at the end of the month.

My bicycle is a Raleigh Carlton Super Course 12. It was manufactured in May of 1980, when I was listening to The Police and Blondie, attending high school in New Jersey, with long hair and much less heft. Little did I know that decades hence this Raleigh, with its steel frame, twelve-speeds, and Brooks saddle would find its way to me in Chicago. Restored in the past few years, the bike, unlike its current owner, shows few signs of age. It is an absolute delight to ride.

Raleigh was one of the largest bicycle companies in the world back in the day. Founded in the late 1800s on Raleigh Street in Nottingham, England, Raleigh grew to a behemoth after World War I. The size of the Raleigh works was breathtaking – and you can get a taste of the factory and how bicycles were made in this 1945 promotional video. It is a trip.

In the 1970s, during a bike-boom, Raleigh was making about 10,000 bikes a year. My bicycle was manufactured at a factory in Worksop, England, on the site of the Carlton Cycles company. Raleigh bought out Carlton in 1960, using their factory and putting Carlton badge for reputation on some of its better bikes – like mine. In late 1980, Raleigh closed the site. In the coming years, all bicycle production was relocated in Asia.

Today, somewhere between 15 and 20 million bicycles, mostly still manufactured in Asia, are sold in America every year. The trend is for growth, too, as more people are finding cycling a healthy, environmentally friendly, and enjoyable way to get exercise and commute. It is great fun. Bear in mind, too, that a well-built and well-maintained bicycle can be a fine companion for a very long time. Basic bicycle functions were worked out ages ago. You can spend more money for something new and fancy. Or you might find a somewhat older, more experienced bicycle, and form a lasting relationship.

My Raleigh Super Course 12 was shipped to the United States in the 1980s and sold in Boston. And while I don’t know about its journeys in America, I’m grateful that it found its way to me. I plan on riding it for many more decades to come. Happy birthday.

And I hope that you, dear reader, have a good bicycle, too.

Published on:May 11, 2020 Category: Things someone who grew up in NJ might write No Comments on An Homage to my Bicycle

My apartment opens to a busy Chicago Avenue. At night, the street is loud with hipsters, tourists, buskers and custom car stereos. Young men and women Whoo and Whoop and the bars clink with bottles and glasses. Sounds are continuous, a constant roar punctuated by thumps and yells, with engines rumblings and street musicians jamming.

Mornings are different. Sound is episodic. Single cars and trucks, conversations, the barking of a dog. I hear people, not crowds.

The bike lane is full. More and more people are cycling downtown to their jobs. Some take their bicycle commute seriously, kitted with panniers, reflective tape and extra mirrors. Others are more spontaneous. They pass by in a steady stream. 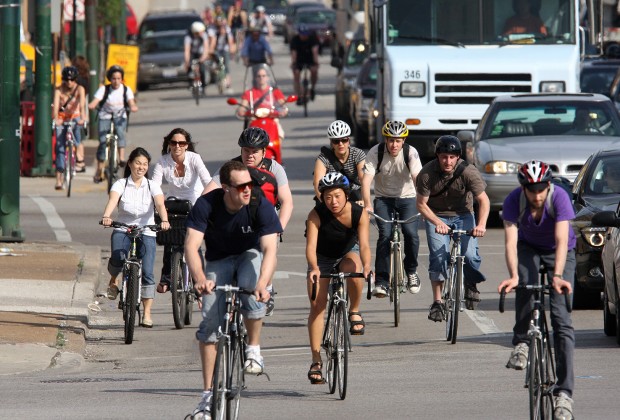 A difficult intersection is up the street, a hundred feet or so from my door. When halted by a red light, the they start together as a mass, a morning peloton.

I like to linger – not watching but listening. I want to hear shifting, the sounds of gears changing. The sound of a well-tuned bicycle is extremely satisfying: silent with perhaps the quietest of hums, depending upon pavement, save for the changing of gears.

A gear change announces itself with a small but purposeful rattle. It is a hiccup, a deep breath before starting something strenuous, a machine readying itself before picking up a piece of work. The pause is brief, less than a second. And then, with a decisive click, the gear engages.