A vitally important book in understanding Latinx Studies and history, Chicanas of 18th Street: Narratives of a Movement from Latino Chicago, looks at the Chicana/o movement of the 1960s and 1970s through the first-person perspectives of six activists from the Pilsen neighborhood of Chicago. Written by Leonard G. Ramirez and the six women activists, the book is a interesting mixture of big-picture policy and theory with “on-the-ground” accounts of what it was like for the participants.

The voices and histories of the women are compelling. They did not push for change because of theory. Instead, they were motivated by direct issues of injustice, opportunity, and the possibility of seeing improvements in their lives and the lives of their family and community. There is an immediacy to their account that compresses conceptions of history, giving the reader a sense of how they – and others – might be swept along. It also was not all that long ago that the very idea of civil rights for all was considered by some to be “radical.” Racism, sexism, and a host of other forces pushed these women and their communities down. They fought back.

Chicanas of 18th Street would be an outstanding book to teach. It makes clear that heroism is not just for the battlefield or distant history. These women were courageous, brave, and heroic – and they did it while juggling day to day challenges and more than their fair share of problems. It shows how change can happen and does happen, a powerful message for students. 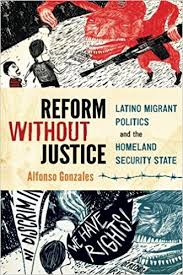 Alfonso Gonzales, a professor of ethnic studies at the University of California, Riverside, provides a provocative and helpful take on the topic in Reform Without Justice: Latino Migrant Politics and the Homeland Security State. Gonzales’s research rests on a solid review of better-known historical events (public marches, legislation, speeches, etc.), interviews with more than 60 activists and many immigrants personally affected by the issue, and a powerful neo-Gramscian political theoretical lens. Antonio Gramsci was an Italian political theorist, communist, and anti-fascist who spent many years imprisoned by the Mussolini government. Gramsci’s work often revolved around questions of power and hegemony. He looked at ways that groups in power are able to remain in power, even in periods of transition and uprising. His insights – which cross many disciplinary boundaries – give tools to help map out complex issues of power, adjustment, and continuity.

Gonzales harnesses a reading of Gramsci to explore how, during a period of national shifts in political parties and massive street protests advocating for immigrant rights, conditions for so many Latino/a immigrants worsened. The US experienced a period where many thought that ground up change would lead to an opening of opportunities and supports for immigrants. It did not transpire. Governmental controls increased. The political culture worked against comprehensive immigration reform and the extension of immigrant rights. To explain this, Gonzales identifies an anti-immigrant hegemony that cuts across parties, social groups, and other categories. This “structure” has grown in power, too, under the Trump administration. Absolutely central to that effort, Gonzales effectively argues, is the criminalization of the immigrant.

Adding to the power of the narrative is Gonzales’s willingness to occasionally insert his voice as an immigrant. He is judicious but when he does insert himself, it resonates. Gonzales is an activist who cares. His work, as a theorist and as a chronicler of change, is valuable.

Reform Without Justice offers a persuasive lens to help to understand current American political culture and politics when it comes to immigration and Latinos.