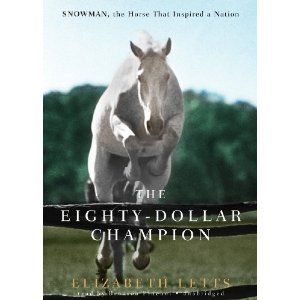 Some books we read to learn. Some to laugh. Some because we’re told to some because they catch our eye. Elizabeth Letts The Eighty-Dollar Champion is a book to read for pleasure,for the simple joy of a good story. Letts is an accomplished author with two novels and a children’s book under her belt. She also rode horses competitively, a background that drew her to the triumphs of an unknown horse and the Dutch immigrant who trained him into a jumping champion.

Harry de Leyer purchased a grey gelding from a knacker for $80 in 1956, with the fee including delivery of the beat up horse to the small Long Island stable. De Leyer was a poor but very talented horseman who made a living teaching riding at a girls school and providing lessons. The horse, christened Snowman by one of de Leyer’s children, was placid, easy-going and a surprising jumper. In fact, de Leyer only learned of the horse’s ability after he sold him and the gelding refused to stay in the neighbor’s paddock.

Once back under de Leyer’s tutelage, Snowman became an accomplished jumper winning national prizes. The story was picked up by the local and then national press and played for all it was worth: poor horse and horseman succeeding in the high society world of equestrian jumpers. When at the National Horse Show in Madison Square Garden, Snowman and de Leyer even took a trip to Rockefeller Center to appear on the Tonight Show. Johnny Carson subbed that night for Jack Parr.

Letts strikes the same chords, emphasizing heart and the bond between horse and man. It is cliched, to be sure, but it is an effective tactic. She does not lay it on too thick, either, a shortcoming of  Laura Hillenbrand’s Seabiscuit, a book which linked the underdog horse, his dysfunctional trainer and rider, with the Great Depression and the very health of the nation.