In Tolstoy’s epic historical novel, War and Peace, the Battle of Borodino is described from the on the ground perspectives of confused, terrified, and (occasionally) heroic characters. It’s a fascinating mix. Tolstoy’s writing is gripping and memorable;. He describes the “fog of war” in a way that would resonate with the phrase’s creator, Carl von Clausewitz, the famed scholar of war. Tolstoy contrasts that reality of the fighting soldier with official accounts and the work of historians. They craft, after the fact, stories of actions that make sense, buttressed by intentionality and causality. Which of these approaches is more accurate? The account of the confused participant or the rational official narrative promoted by officials and taught to school children?

That tension between personal and official is woven through an intriguing World War II novel from the Imperial War Museum, Eight Hours from England. It is a dark novel of spies, betrayal and double crosses, set in Albania in 1943. The Germans had occupied the country throughout much of the war, but their control was slipping, becoming tenuous. The Allies sought to pressure the situations. The Albanians, roughly organized into a communist and nativist camps, was less interested in Allies versus Axis and more in their own country. Each sought to gain political control in the face of the larger war in the Mediterranean. Into this complicated mix of non-aligned alliances, British Major John Overton is sent to organize the resistance and convince the Albanians to fight against the Nazis.

The novel is based on the personal wartime experience of Anthony Quayle, a name that might sound familiar if you are a movie or theater buff. Quayle (1913-1989) was one of England’s most famous and successful actors. A star on stage and in cinema, Sir Anthony was nominated for an Oscar and was in many important films (Lawrence of Arabia and Anne of a Thousand Days, to name a few). He directed, organized theater companies, and had a most impressive stint in World War II. An officer in the Royal Artillery, he joined Special Operations and was dispatched to Albania. His lived challenges, in all their frustration, became the foundation for Eight Hours From England.

Quayle’s time in Albania was extraordinarily dangerous. Fellow operatives and Albanians died. The post was debilitating. When he was extracted, he had to spend significant time in hospital recovering. Quayle considered his mission a failure. With the benefit of hindsight and better understanding of the contours of the war in the Mediterranean, it is difficult to imagine a different outcome for the initiative. With little knowledge of the people or its culture and few longstanding partners on the ground, Britain’s influence in Albanian politics during the war was destined to be negligible at best. Add to that the swirling alliances in Europe in 1944, before the US landing at Normandy, and it is understandable why leaders and their groups hedged their promises. Quayle and Overton’s mission was a lightly-resourced attempt that had little chance of success.

Realistic pessimism, accordingly, is a string that hums throughout the book. Like other war novels based on personal accounts, the limits of agency and influence are emphasized with an immediacy that is almost palpable. It may all be well and good to serve and perhaps be considered heroic, but for those in the field, fate and happenstance loom large. War is an indifferent beast. That realization makes the actions of the novel’s characters, and Quayle, all the more moving. They know and we know, yet they continue to do all that they can.

Quayle’s writing is outstanding and ranks among the best of the cloak and dagger war thrillers. He is very good at building tension. Quayle skillfully builds tension, leaves clues, and is judicious when he wants to make broader points. The people and landscape are deftly sketched. Damp Albanian caves, impoverished villages and even poor teeth find their way into the text in a manner that enriches the novel. Should Quayle abandoned acting, he would have been a celebrated author. And if Eight Hours to England had found a willing investor, it most certainly would have made a very stirring film.

Another Good Reason We Won the War

Harry Hopkins is one of those historical figures that pops up in correspondence, photographs, history books and television shows about World 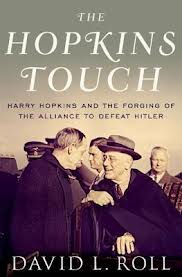 War II. He’s in the text, in the captions, but it is difficult to know exactly who he was or what he did. David L. Roll remedies this in an immensely readable book, The Hopkins Touch: Harry Hopkins and the Forging of the Alliance to Defeat Hitler. A big volume that is easily handled, The Hopkins Touch chronicles the life and influence of a Midwestern reformer who became one of President Roosevelt’s most trusted advisors.

Hopkins was a progressive reformer who found a home in the New Deal. As he became known to President Roosevelt, the two men hit it off and became very close. Hopkins was discreet with a real sense of humor. He did not need the spotlight and he had an unerring gift for discerning the true matter at hand. Loyal, smart, and extremely effective, Harry Hopkins was an extension of FDR.

Hopkins was also a very ill man. Following intestinal troubles as a young adult he had much of his stomach removed, leading to a lifetime of complications and pain. A chronicle of Hopkins life is filled with trips to hospitals, consultations with physicians, collapses and near collapses. At death’s door for the last two decades of his life, Hopkins nevertheless was able to engage and persevere. His ability to focus and work through extremely stressful and demanding responsibilities while in great physical pain was acknowledged by all around him.

Roll’s work highlights Hopkins’ diplomatic skills. He made a great impression on Churchill, Stalin, and many of the other wartime leaders. His charm was certainly enhanced by his relationship with Roosevelt, but it also was quite effective on its own. In many ways Hopkins’ communication ability and smarts was critical in bringing the Allies together and helping them fight collaboratively. That was no small accomplishment. So even though Harry Hopkins lacked a formal title through much of World War II, he is well worth considering, remembering, and above all, thanking.

Published on:March 3, 2013 Category: Reviews, Things someone who grew up in NJ might write No Comments on Another Good Reason We Won the War