Professional historians tend to be snobs about popular history. While a well-reviewed and discussed book is a boon, historians who consistently sell books that might make it to the non-academic press carry a taint of suspicion. Only a few can manage the jump to the for-profit presses, and when they do they are rarely read in graduate seminars or referenced in conferences. And the very unusual historian who can crank out best sellers is usually cast off the island to swim in different waters.

Take Steven Ambrose, for example, whose ethical lapses validated the exclusiveness of the mandarins. With some early strong biographies on Eisenhower and Nixon, he parlayed an extraordinarily effective writing style into an industry. The scuttlebutt was that he was too prolific and cut corners. Undeterred, Ambrose cranked out a wide range of books on World War II, aviation, Lewis and Clark, and much more. He was executive producer of HBO’s A Band of Brothers. And with the success came scrutiny and the realization that Ambrose serially lifted prose from others and inserted it into his own. The man was, in fact, a fibber – something handy in storytelling but a liability in the historian’s pursuit of the truth.

But being popular does not mean that one has to lie, cheat or steal. A select number of historians are able to serve Cleo faithfully and expand the knowledge of multiple readers. Middlebrow is what the genre used to be called and it’s essential for an educated society. And when historians do not reach out and make their topics appetizing, journalists and writers do it for them.

From that larger context, a few thoughts about Evan Thomas‘s The War Lovers: Roosevelt, Lodge, Hearst and the Rush to Empire, 1898. It is a well-written a timely book telling the “story” of America’s entry into the Spanish-American War in 1898 through the respective biographies of Theodore Roosevelt, Henry Cabot Lodge and William Randolph Hearst. All three men’s trajectories are brought together in an almost tragic-comedic recounting of the battles in Cuba. Weighing heavily on the narrative and the structure are Iraq and contemporary international politics; the connections are almost inescapable. 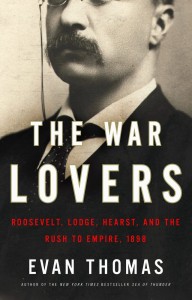 For readers who know little of the Spanish-American War, who have forgotten the Maine, the book is a helpful but narrow introduction. For those that know of the conflict and have dipped into the popular history of Roosevelt, the book provides a slightly cynical take and a useful corrective. Above all, it is an entertaining read. But when it comes to historical understanding, the book falls short.

Popular history often gains readership through reducing the complex to the simple, providing clear reasons for causality. Thomas does it in the War Lovers, capturing the connections between personal ambition and national expansion, or nationalism, in the key protagonists. It is a good argument and an important factor. Missing, though, is an awareness of the larger world and the forces of imperialism shaping the globe. Economic concerns are absent and the push and pull of partisan politics is downplayed. The foolishness of the Spanish receives little attention. In fact, reducing complicated international conflicts to comparative biography can lead one down a path of simply getting history wrong. One of the fascinating things about the broad sweep of history is that it is always – always – greater than the reach of any one individual.

Thomas does not get it wrong. His reading of Lodge is good and his characterizations of Hearst and Roosevelt, two extremely interesting figures, is not far off. Thomas provides a solid account. A good historian, though, if so inclined could provided a richer, more interesting account.