One of fashion’s few certainties is recurring change. What is in fashion one day is later not and the hot young designer is rarely the hot mature designer. Writing about fashion faces the same challenges and it is a rare look at this multi-billion dollar industry that lasts. Teri Agins’ The End of Fashion has legs. Dated legs, but the issues she addressed are worth considering today, too. 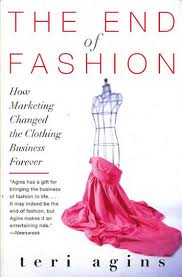 Penned in 1999 by Agins, a writer for the Wall Street Journal, the book is a from the ground up look at massive transformations in capital, process and reach in the fashion industry. Agins looks closely at the work of a limited number of designers. In the 1980s, it was still possible for a designer to create in an atelier-like setting. By the time the book was published, such models were rarities.

What happened? A confluence of factors led to the shift. The power of finance played a role, as did the growth of a middle class with the means to identify and purchase more. Most important, Agins notes, is the influence of marketing. Interestingly enough, the forces that transformed fashion also reshaped it from the inside.

Fashion, or at least haute couture, is about the commodification of time. A well-designed dress (and it’s almost always women’s clothes) represented the designer’s time and the time of those who put it together. The more ornate and the more carefully constructed, the greater the time – and the greater sense of exclusivity. A fine garment’s other exclusivity also stems from time, for a designer’s collection would be worn within a limited time, furthering its exclusivity. Extend a design to the masses and its exclusivity disappears, leaving questions and concerns.

Agins is less interested in these questions and more in the ways that designers and houses navigated these shifts; some sold out, some profited and some failed. She recasts the marketed brands as business enterprises facing particular challenges. The personalities are often outsize and the contingency of it all is tremendous. While people hunger to distinguish themselves – fashion itself matters – relative value any one designer or house is always contingent. All told, it is a very tough way to make a buck.