“This is the saddest story I have ever heard.” It is the famous beginning of Ford Madox Ford’s The Good Soldier and it applies, too, to David Finkel’s The Good Soldiers. Lyrically haunting and extraordinarily depressing, Finkel’s account of an 8-month im-bed with a battalion stationed in Iraq during the surge is an exercise in the horrors of modern warfare. The book captures the voices, the perspectives, and the kaleidoscopic disunity of war. The portraits of the soldiers are compelling. 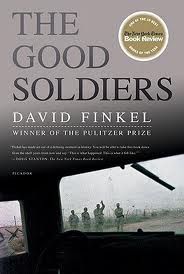 Life, death, and disfigurement are random events, unconnected to training or preparation. The specter of IEDs undermine a soldier’s relationship with the environment. Everything can be lethal. In that environment, the very nature of what it means to be a warrior is problematic. It often means exposing of the self to an unseen enemy – amid millions of dollars of technology – and not fighting, trusting to a populace that neither understands nor can communicate. While physical heroism, in some imagined state, used to mean physically challenging and fighting an enemy, today’s courage is strangely more often about not fighting. But where does a soldier locate trust in Iraq?

Overlay that suspicion with the acute suspicion that there is no point, no telos to the conflict – a realization that is so powerfully undermining that it can never be voiced – and the pathos of these soldiers and their predicament is acutely rendered. They have to believe in the job. If they don’t, they can’t endure the horrors of the job.

Each generation, I suppose, has to discover its good soldiers and to wrestle with the gap between nationalistic rhetoric and the carnage of the battlefield. It happened in Vietnam, it happened in Korea, and it even happened in the “Good War” – World War II. But perhaps it was most acutely rendered in World War I, as the late Paul Fussell repeatedly observed.

In fact, the acute chasm between romantic rhetoric and military action is a less-explored but fundamental component of modernity and post-modernity. Subjectivity gains greater agency even as its ability to affect outcomes, render meanings, or even to gain understanding is sapped.  Nowhere is that more clear than in war, when the manifestation of abject chance overwhelms induction, deduction, and even superstition. It is the ultimate black box – with an indifferent operand.