Growing up in northern New Jersey in the 1960s and 1970s, my family would drive down the shore in the summer months to enjoy the Atlantic beaches. Our favorite spot was Ocean County. We would get up early in the morning and head to Island Beach State Park for a morning and afternoon of sun and surf. Folks would tire of the sand by late afternoon and we would then head to beach communities and boardwalks of Seaside Heights and Point Pleasant. The shore is a sanctuary and a breath of fresh air in a Garden State that is often less than verdant. 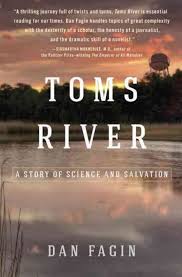 The beach towns of NJ are located on a spit of land separated from the mainland by miles of sea, inlet and marshland. One the mainland side, most travelers to Ocean County head take a bridge on Route 37 from Toms River to beach communities. Toms River has developed over the years. When I was a child I remember farmland and the occasional diner. Today it dotted strip malls, many subdivisions, and ceaseless traffic. For many of us in New Jersey, Toms River has been a town to drive through, a traffic bottleneck on a journey somewhere else. We should have stopped and paid attention. Many bad things were happening in Ocean County.

As Dan Fagin chronicles in his outstanding book Toms River: a Story of Science and Salvation, the town has a sinister and literally, toxic history. Fagin is a science journalism professor at NYU. A longtime environmental reporter at Newsday (a Long Island newspaper), Fagin has written for many publications and garnered many awards. Toms River received the Pulitzer Prize for nonfiction and many other awards. All of them are well deserved. It is superb book.

The story of Toms River that Fagin chronicles consists of multiple distinct, yet interrelated, strands of history, knowledge, and action. Toms River’s historical and political development, from its basic geography and topology to the settling of the area and its demographic growth in the 1970s and later is one thread. Farmlands and woods gave way to industrial development, suburban homes, and then more and more homes. Another strand is the phenomenal growth and influence of the chemical industry. Starting in Germany and Switzerland and extending to the United States, the industry made great profits from the manufacturing of dyes for textiles and other products. The genesis of this whole income stream was a desire to do something with the detritus of a burgeoning petrochemical industry. The science around hydrocarbons, and the hard work that went into understanding them and the many ways that they interact with flora and fauna, is another strand in the book.

Fagin explains more than the bench science. He provides a wonderful explanation of large-scale environmental causality and probability. A dry topic in less skill hands, statistical probability and its role in making hazard and risk clear and actionable is extremely important. It is very difficult, if not impossible, for people to believe connections between illness and action if they are mediated by time and lifestyle. Cigarette smokers do not die of cancer within days. However, rigorous science can prove a causal relationship. If the arguments are persuasive and there is sufficient political and public will, policy can change. Determining the connection between a soup of dumped chemicals that leech into a water supply and a statistical increase in childhood cancer is a much harder lift. Fagin methodically uncovers the links, debates, and actions in government and public health circles in another history.

Finally, and perhaps the most compelling part of Fagin’s book, there are the stories of all the people involved in Toms River. We meet childhood cancer victims and survivors. We hear the voices of their parents. Greenpeace takes the stage for a while, as do environmental activists, small-time crooks, overworked bureaucrats, corporate leaders, union workers, lawyers, and the hundreds of people whose live have been caught up in the legacy of chemical waste in New Jersey. At the heart of the book are Linda and Michael Gillick, a mother and son whose live were completely reshaped by Michael’s devastating cancer and treatments. The truth about what happened in Toms River would never emerged without their passion, skill, and commitment.

Fagin subtitled the book “As Story of Science and Salvation.” Thanks to the untold efforts of Gillicks and many others, governmental agencies were roused after decades of indifference, if not out-and-out collusion. Fines were levied, indictments made, and eventually, noxious dumping practices in New Jersey were halted.  Cancer rates have decreased and the community has been delivered from the sins of chemical companies and toothless regulation.

Difficult questions, though, remain. How could companies that poisoned water, towns, and workers for many years escape the legal consequences of their actions? While the difficult science of linking environmental poisons to specific maladies was not always crystal clear, chemical companies like Ciba (the parent company of Novartis) had experienced many years of complaints and lawsuits. Ciba’s Toms River plant was built with minimal environmental concerns as Ciba fled regulation and attention from their Cincinnati factory. Companies like Ciba willfully avoided looking at long-term consequences as they dumped all manner of noxious waste. What sort of ethical expectations, if any, do we have for companies? Who takes responsibility and why.

The saga of Toms River is a powerful counter argument to libertarianism. Without governmental action, untold numbers in the Toms River area would be sick, dying or dead. Yet governmental officials are no more heroic than the families struggling to save their children. There might be salvation, but there are no happy endings here.

We will be reading and thinking about Dan Fagin’s Toms River for decades to come.