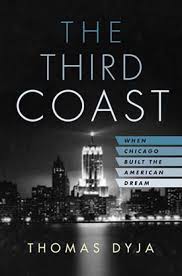 Sometimes when feeling adventurous – particularly when time is not an issue – I will engage in a free-wheeling conversation with a stranger. The place where I start this matters – a bar, a library, waiting in line – and so does the stranger’s appearance. The likelihood that I will make an observation or ask a question increases if the person looks like they have opinions and something to say. These forays fall flat every now and then. But more often that not, asking the right question at the right moment opens up a vista. I listen and learn. People are interesting. And occasionally that chance encounter leads to an informed discussion that carries with it observation, nuance, and heft.

Thomas Dyja’s The Third Coast reminds me of such a chance encounter. A novelist, playwright, and editor, Dyja has a way with words. They flow from his pen, building scenes and capturing moments. He is a long-time Chicagoan with a approach-avoidance relationship with the city. He loves it and it frustrates him terribly. Dyja’s book is a narrative history of the Windy City, covering 1932 – 1960, a period we historians think of “modern” America. He is deeply passionate about Chicago. Dyja now lives in New York City.

Dyja is no historian. He is unconcerned with large-scale continuities and movements. His story is disconnected from national economics, politics, and established historical analysis. What he brings to the table is an intimate familiarity with some key individuals, some critical conflicts and divisions, and a playwright’s understanding of drama, tension, and resolution. The key players in The Third Coast are Ludwig Mies van der Rohe, Mahalia Jackson,László Moholy-Nagy, Nelson Algren, and Richard Daley. A cast of hundreds, though, vie for Dyja and our attention: Hugh Hefner, Studs Terkel, Ray Krok, Dave Garroway, Katherine Kuh, Gwendolyn Brooks, Muddy Waters, and many more. Dyja is free and funny with observations and opinions. His critical take on Robert Hutchins, for example, is withering and memorable.

The themes Dyja explores are about race, culture, and identity – played out in the development of centers of power in Chicago. North side versus south side, of course plays an important role. But so, too, does competing visions for downtown Chicago. Dyja is after an ever elusive zeitgeist, a sense of what forces were driving this extraordinarily dynamic city to be both the most American of all cities and also the most disappointing in not fulfilling its promise.

I learned much from The Third Coast. But like that lengthy discussion with a stranger, I left wondering just how much to believe – and why.