Making sense of Chicago is no easy task. The city is an amazing jumble of neighborhoods and histories that are easy to misunderstand or miss. Chicago has the second largest population of Mexican immigrants in the US. However, the structure and social fabric of this community is not well-studied or well-known. 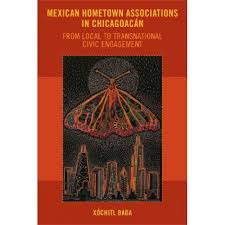 Xochitl Bada, a professor at the University of Illinois at Chicago, opens an important window into this world in her book, Mexican Hometown Associations in Chicagoacan: From Local to Transnational Civic Engagement. The title may be imposing but the read is informative. Grounded in scholarship and the product of Bada’s graduate studies, it is a thoughtful and carefully crafted work. It is also a correction on assumptions one might make about civic engagement and the Mexican immigrant community.

Drawn to the topic because of her interest immigrant rights and activism, Bada volunteered with the Federation of Michoacan Clubs in Illinois (FEDECMI). The Federation’s scope and history gave her a unique view to examine the HTAs and the people they affected. She saw the growing organizational prowess of the HTAs, in Mexico and across the Caribbean, and also the impact of a change in Mexican law that gave those living abroad the right to vote in state elections. All of this occurred against a backdrop of anti-immigrant and pro-immigrant laws and action in the United States.

Bada sketches out the broad conditions and history of Mexican immigration to Chicago. She focuses on the experiences of those who hailed from Michoacan, a state in western Mexico. Mostly driven be labor opportunities in the earlier parts of the twentieth century, Michoacan immigrants journeyed to the US and were supported by mutual aid societies. In 1964, the bracero program ended, meaning that laborers to the US were no longer “guests.” Consequently, the mutual aid societies became less relevant. For Mexican immigrants to Chicago, that spelled an increase in the importance and relevance of hometowns and hometown associations for the immigrant community. The HTAs range from social clubs to sporting groups to active political groups.

Using history, journalism, and first person interviews, Bada explores the Chicago – Michoacan HTAs. She maps their internal networks, the connections with church and state, and examines how they both recreate and challenge traditional social structures. Undergirding their importance to Mexico over the years are the consistent flow of remittances from Chicago. The HTAs are more than local Chicago organizations – they also have a powerful impact in their home towns and region.

By the 2000s, Mexican politicians would regularly visit Chicago HTAs to connect with the community and drum up support. Many members of the HTAs held dual citizenship and the organizations fostered a special kind of dual civic engagement. Bada digs deep into theory and practice to explain how. The HTA’s clout led to joint funding opportunities for economic development in Michoacan. While the projects did not meet financial expectations, the HTAs have maintained an active voice in local Mexican politics. When those living away from Mexico were granted voting rights in 2007, the importance of the HTAs increased significantly. They consistently press a democratic counter narrative to the plans of large-scale development as pushed by international organizations and states.

Pulling the pieces of these organizations and their history together, Bada explores what they mean in terms of identity, geography, and community. Organizations whose membership and focus spans countries face particular challenges just in terms of basic logistics, which also mean difficulties in terms of communication, trust and agency. Technology has been a powerful enabler. Bada does not write about this, but it clearly has an impact.

Bada does explore the consequences of transnational organization and advocacy. She rightly identifies the city as a key context for communication and interaction. Cities facilitate collaboration much more than nations. The democratic tendencies of the HTAs, which emerged in rural Mexico, have found support and meaning in Chicago’s urban environment. What happens in one area can resonate in the other, and the exchange is often mediated by the HTA.

The very nature of the book raises provocative questions. In an era of global travel, multiple identifies and instant communication, what does citizenship look like? How does one understand community? It is interesting work, indeed.